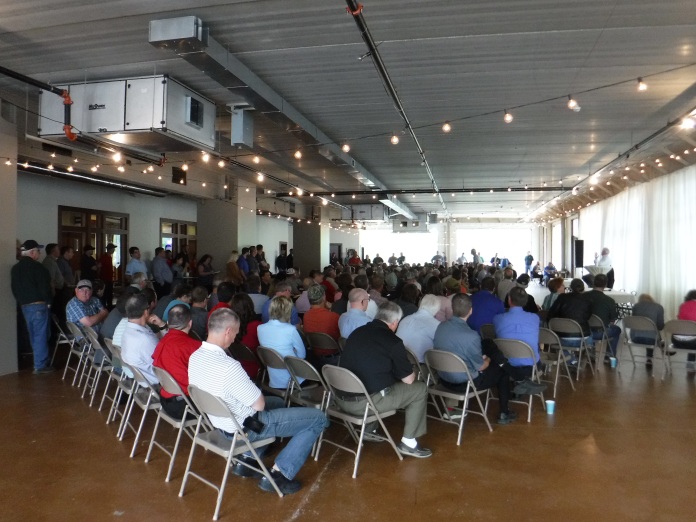 “Twas probably the biggest room in Marshall, Minnesota but it wasn’t big enough for this SRO crowd of farmers… And we had only one day notice of the meeting! I’m a regular at these meetings Minnesota 7th District Congress Member Collin Peterson holds, and usually it’s just 20 or so of us from the usual groups trying to bend the Congress Member’s ear. So what’s changed?

Farmers are facing a triple whammy of low prices, stupid Trump tariffs, and climate change. It started with bumper crops and overproduction that drove corn and beans prices below farmer’s cost of production. Ten thousand cow corporate mega “dairies” flooded the market for milk and drove family dairy farmers out of business, while less than a handful of major multinational meat packers used their monopoly power to steal the profits from livestock farmers.

Then came Trump and his stupid tariffs, which instead of opening markets for our farmers produced retaliatory tariffs that chased away our largest market for beans- China. That’s just the half of Trump’s tariff tragedy- Notice how most everything on a farm is made out of steel? Yup, Trump’s tariff tragedy jacked up the price of metals, and we’re paying 20 and 30 percent more for farm machinery than we did before.

Finally, climate change got real with months of flooded fields and farm to market roads, railroads, and rivers closed. My friend’s family farms in South Dakota, and they’re having trouble finding roads where their tractors won’t sink into the mud just so they can get to their flooded fields to hopefully plant a crop. Congress Member Peterson asked the farmers who had been able to plant to raise their hands, and not even half the hands in the room went up. Then he asked those who had completed planting to raise their hands… And in a room overflowing with hundreds of farmers, not a single hand went up!

So the farm crisis is now, and Congress Member Peterson, who all the democrats and even the smarter republicans pay attention to when he talks about farming, detailed how the Trump administration’s actions and reactions to their self inflicted crisis are just making matters worse. For example, while farmers have but a few days left to decide whether and what to plant, the Trump administration has yet to commit to what trade adjustment aid will be paid for what crops, and those numbers will probably change every time you cross a county line. This vagueness is vexing farmers- We heard from a new farmer who was underpaid because he had no previous year’s production records to base the amount of aid he received on, while a couple brothers from Brazil who own meat packer JBS managed to pass themselves of as “farmers” and collect millions in subsidies!

So the crisis is now, and everyone will be effected no matter where they live… International mega corporations are ready to swoop in and buy up farms, machinery, co-ops, and small town family businesses at bankruptcy sale prices then use their monopoly power to jack up the prices we pay for food, fuel, clothing, and even electricity. It’s time to put aside trifling differences and support our family farmers- The farmers we save today will feed us tomorrow!